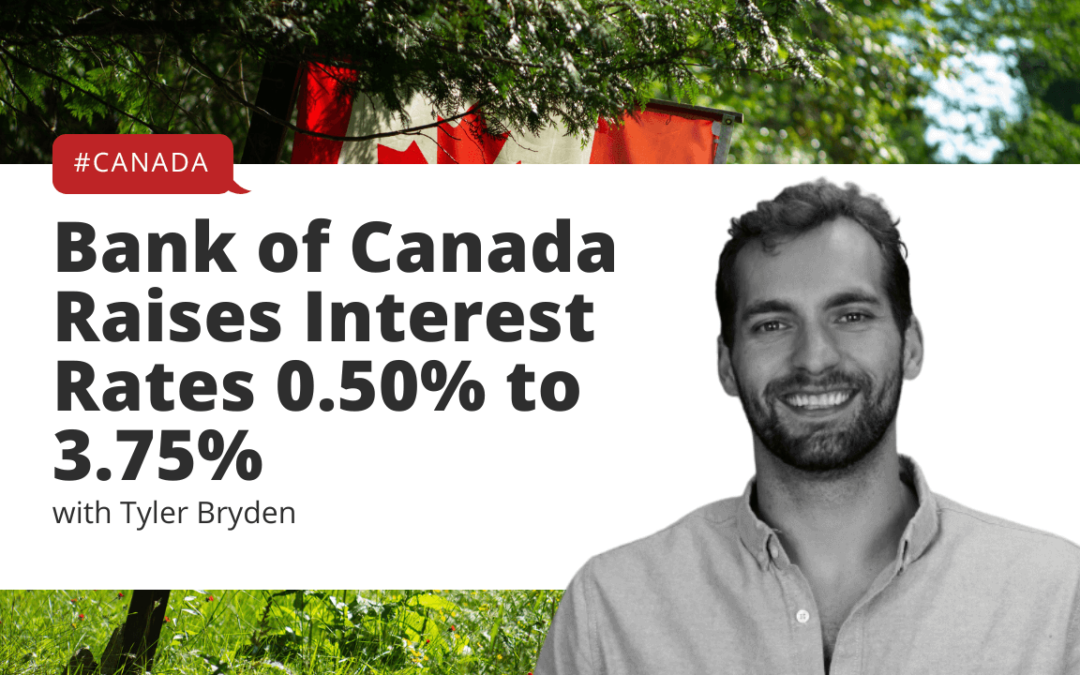 – Bank Continues to Be Concerned About Inflation
– Lower than expected 0.75
– Some people are happy others are not
– In the last three months, CPI inflation has declined from 8.1% to 6.9%
– A recession is almost certainly happening already or coming
– Canada’s Economic Growth Expected to Stall Through Middle of 2023
– The Bank of Canada Governing Council expects that the policy interest rate will need to rise further
– Market was priced for 75 basis points
– BoC Governor Tiff Macklem continues to beat a hawkish drum
– Inflation around the world remains high and broadly based
– Housing activity has retreated sharply, and spending by households and businesses is softening
– The next scheduled date for announcing the overnight rate target is December 7, 2022

All right. Hello. Hello. Tyler Bryden here. I hope you’re having a day. Bank of Canada. Goes ahead. They raise interest rates. Another 0.5 today that ends it at 3.75. I am no expert in this. I’m just here in pain as a person who bought a house in November 2021 right before this, you know, this crazy, crazy climb up. It was already crazy enough and despite my own gut instinct, listened to lots of people, talked to lots of people, and took a variable rate mortgage.

And you know, since that first getting into the house, the very first day we stepped in, I think there was, you know, 0.5 interest rate increase that day we thought, wow, that’s great, but we’re still, I think we’re at 0.99 at the time, which was great prime minus 1.46. And then since then it has been a continual climb, a climb of interest rates. I have a little chart. Here to show what this year has looked like. This was, even before the end of the day, going to follow you because that was a cool piece. That was 3.25. That was before the announcement today. And, you know, overall, lots of different varying opinions. Lots of people sort of looking at this, some people saying, you know, people taking advantage of this Pierre there saying, oh, this is Justin Trudeau’s fault, you know.

Lots of people thinking different things, other people saying hey, let’s keep this, keep this going up, let’s bring these prices down. Other people obviously predicting you know with the economic slowdown that in February and everybody inevitably, inevitably is taking place that we are entering a recession and at some point they’re going to need to decrease these rates back down. And again, I’m an idiot so don’t listen to anything I said. I took a variable rate mortgage when people were when it was at the all time lowest and it was two. Selfish and greedy to understand the historical perspective of where we were. And sometimes I blame that on other people, but I have to rightfully blame that on myself. And, you know, lots of things are then occurring. The world is changing with these interest rates. Overall, the world is, you know, in a high level of inflation. Canada is actually doing better than most we are at. In the last three months, the CPI inflation has declined from 8.1 to 6.

29 and the Canada’s economic growth. It’s expected to stall through the middle of 2023. The Bank of Canada expects that the policy interest rate will need to rise further, and people are sort of pricing in another 0.5 in December 7th, which is the next overrate overnight rate announcement. And then possibly another 0.25 or maybe it’s a 0.5 and then another 0.25. Today’s interest rate was actually.

Under what was priced in from the market, which was supposed to be 0.75. That’s what we were bracing for here and it was ended up being 0.5. Still not great as someone who’s in the situation that I am but and you know it’s not it’s not done knowing that there are impending interest rates coming but. This is you know a huge shift that will that they’re starting to see as you know house prices sort of retreating and activities retreating spending by households and businesses softening. And you know this is super interesting as we go into a time where Christmas is coming up where it’s it’s a very large consumer spending time already sort of quarterly reports from Google and and companies are coming in and they’re actually a little bit under.

What was expected and it’s hard to say that when you know, last years were so enormous for them and it was at the sort of frothy time, but definitely some signals that we are moving towards a dangerous time in the economy. The bank, yes, again continues to be concerned about inflation. And so for that reason these interest rates continue. Old tiff Macklem, BC Governor, Bank of Canada governor, he remains pretty hawkish on this. And so and people are very, you know, very much expecting these other interest rates to increase. I don’t even know if I have anything else more to say, but now people.

Are, you know, sharing their experiences online on the impact on the economy, the mental health, a lot of people dunking on people because they because they locked in a rate at, you know, whatever it was. I can see in this on Reddit like they rocked in a rate from like 2 to even like 3.5% for 5-10 years. And those are, you know, I get it. I don’t think I would be dunking on people, but I think that there are people who are very proud that they made that decision. As always, I’ve got links here and one of the other big concerns overall is people getting closer and closer, but they’re now hitting trigger rates, trigger rates being on the mortgage where you’re your interest. So if you’re not continuing paying, if we have, if you haven’t been through these interest rates hikes, been paying more every month.

They’re now crossed this threshold, that’s trigger rate threshold, where you’re paying more interest than what is covering your payments, not even covering the interest. So guess what, you got to pay more. And so a lot of people are now hitting it with the 0.5. They haven’t hit it now, they will hit it on the next one. I think we’re about to hit our trigger rate. And again, we’re lucky. Monica and I are very lucky. We’ve, you know, we’ve, we still bought a house that was expensive, but we are both, you know, pretty good our earners were going to be able to.

Navigate through this and, you know, overall we will make it through unless something crazy happens. But well, I shouldn’t say that’s not going to happen. But I know like I think of people who are parents who have kids who have expenses, maybe they don’t earn as much. That’s severely challenging situation. And so I feel for people out there. I know it’s again, people are saying, oh, you’re so dumb that you did that. You got that right.

Or whatever it is, but. You know we’re not all as knowledgeable and experts in this that we would like to think we are. We’re just trying to do the best that we can and take advice from other people and and you know we didn’t expect this. I I had been told that at most Canada was going to raise that 0.25 and they would do that once per quarter. And so maybe we went up at 1%, but we would still be far, far ahead for many years. And so it’s definitely been a a shock something that we did not see the amount of stress and and sort of.

Thinking over this and thinking about it and reading about it is not worth it. I wish that that, you know, just locked in that fixed rate and I had had better advice and I had better understanding before making those decisions. But that’s retrospect. You just do what you can, you move forward. And I hope that everyone is doing their best to adjust, adapt and make it through these. With all things considered, I feel for you. I don’t have anything else to say. I just love you all. I hope you’re doing OK and I know we’ve got some more rocky roads possibly ahead of us.

Here. But, you know, I hope that you have people around, you care, you all can take care of each other. You can all love each other and that will continue moving forward and make it through this difficult time together. Thank you very much. This has been Tyler Bryden reviewing the interest rate today, 0.5, we’re now at 3.75. It’s been aggressive climb. This is just a side topic that I talked about. Do not take me as an expert. I’m not making any predictions, although I will say it looks like we’re going to see some more of this and maybe it tapers off, but overall.

The predictions that this may remain at this kind of interest rate for 202342024 before dropping, and even then it’s not going to be what it was before. So thank you so much for checking this video out. Hope you have a good rest of your day, all things considering. Bye bye.