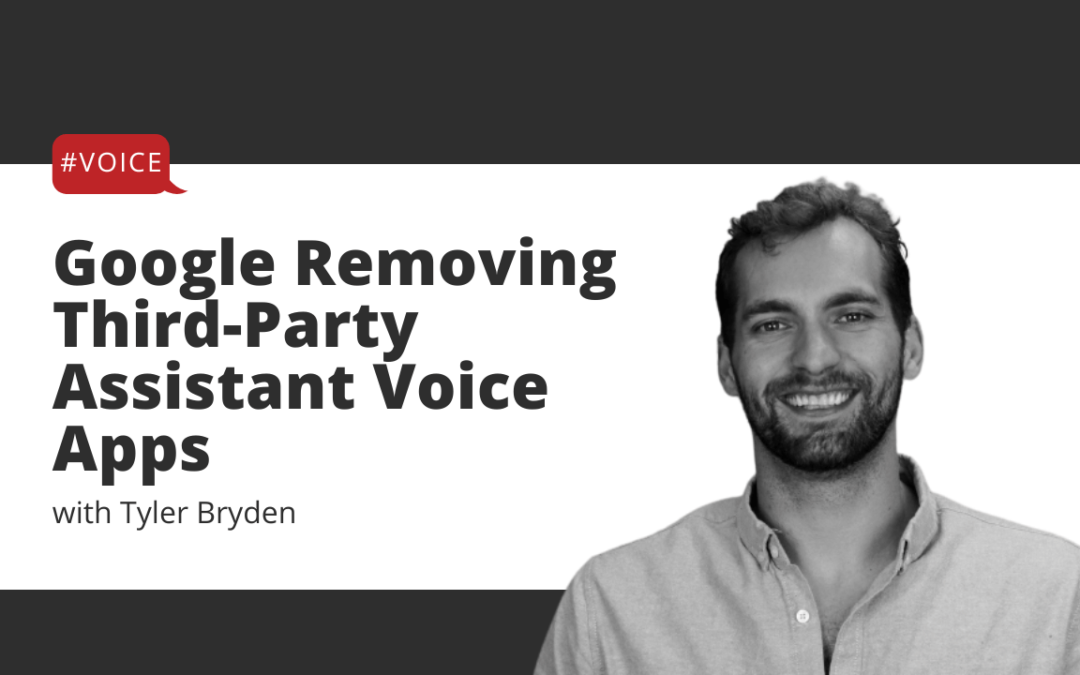 OK, Hello Tyler Bryden here sprouting a new haircut. I gotta get some some tan on the sides here. A little little white and raw on the sides for anyone who’s been turning these videos. The hair was long was like a little bit like a hippie change was needed. Changes here today what I want to talk about something interesting. I’m actually still sort of deconstructing this, figuring it out, and that is the basically the sun setting or the removal of basically Google Third party assistant voice apps and then Nest Hub games amid. Basically a focus on Android and so for people who are familiar with this. It was basically a way for you to interact voice first with with Google, primarily through primarily through what I would say like our smart speakers. They didn’t have smart displays. I’m not too familiar with smart displays, but we’ve all dealt with Google Home. You know, Alexa devices and a lot of these applications were voice 1st and there was really exciting sort of innovation that took place.

But what has sort of emerged is that these. There are a lot of challenges with designing experiences through voice 1st, and as some people have sort of put in some of the comments and I’ve got some links here are this might be a little bit of a nail in the coffin for some of sort of voice first experiences, but there is, you know, some shift to continuing this through app actions with Android. And basically what’s happening. And this is my understanding of it, so would love some, you know feedback or or filtering or challenging on it if I’m actually displaying this wrong. Is that you could query into these engines a smart device at home. A Google Home device, and you could actually invoke an action to happen and you could do that without. You could do that without saying an app’s name, so it could be a specific sentence that was used to invoke an action trying to think of a good example, but it’s not coming to mind right now. And and then you can see one here and a lot of these were then third party companies who were trying to build these interfaces of voice within Google.

With getting Google ecosystem and what has happened here generally I think there’s been a couple of trends. Which is that this hasn’t as tuition as people thought that the interaction layer is. Yeah, it’s just a little bit of a struggle. And then there was a challenge of sort of third party companies in the way that they were building these systems and then a lot of people have dealt with maybe a problem of hey querying into the system or trying to make a command it getting the intent or understanding what that was not getting that right and then sort of breaking or running into a loop or etcetera etcetera. So Google has a history building things and then shutting them down. This is a one of them and it does impact some of the community. A lot of people who have built on these systems for a long time or built us and saw the potential, but then with that potential also saw the challenges that were taking place. So I’m going to share a couple of links. I think these are some like so some Tim. Here was the founder of Voice global voice tech global here in Toronto which did amazing work for voice tech. And then.

There was also Brett here from Voicebot AI, which is incredible website. I think I’ve got a resource popped up here that I’ll pull up in a second sort of talking about Google slowly sunsetting this and then focusing. This shifting this focus to the actual Android apps itself, so there is some really interesting insights that that I think we’ve maybe you felt as a person is that voice search itself actually looking for search results or information through voice is actually incredibly powerful, and what seems to be happening is it continues to grow, but a lot of the applications on Google Home and Alexa were very experimental. Not maybe as practical, and that’s why we’re seeing sort of the slow decline. Or maybe the slower adoption than maybe originally expected. And I do think again, there was a lot of innovation happening here, but that doesn’t necessarily mean that that innovation is well used or creating true value. So there was anyone who sort of followed voice, voice, technology interested in this?

Has seen some signs that this may be coming and really what this leaves is what Peter talks about here. Is that like? What will Alexa do? So what will Amazon do really? The only mass market option for voice 1st and generally.

There has been some signals that, and they’ve refuted these signals, but that Amazon has struggled to sell or hit a peak in Alexa devices and then also the usage isn’t as high as what people see. So the I guess the positive side here is, and there’s I pulled up. I ended up, you know, deep into a couple of links and a lot of stuff going on here is that they’re now integrating this with with apps, and so instead of say, you know making a query or an invocation. And that then interacting with the system automatically of a third party service. What that’s going to do is actually redirect you to an App Store link so that you can download the app and so that is a very big change. That means that you are living literally having to download the application to interact with it instead of just being able to do actions without even invoking the name itself, and so that is something that.

Is going to be a change. It’s made some people sad and you know there are giving a sort of a year to sort of sunset. This even at offering like a cloud credit severance package for developers who have been building on actions on Google. But this is a long line of events like this that had taken place and then there’s now sort of. The emergence of other things that may be taking place, one of them being the Googled, so the memory feature some more personalized speech recognition and then there is also.

Some really fascinating stuff around, just the way that you can integrate into the actual Android assistant itself, and then how you can how you can do that happen, but overall this is a big change. I’m still sort of processing. Learning through this is a very complex ecosystem that has actually taken place here. You can see some of the comments on Reddit people complaining about that they did actually have functionality that was leveraging third party assistant voice apps, whether on whether on home devices and then in these nest hub games. No, I don’t know much about these hub games. Apparently there are some pretty interesting things on there, and Google says it’s going to support of children’s entertainment through this. And obviously again lots of challenges, but lots of really interesting things that were at least being tested and maybe would have created value in the future. And then lastly, one of the questions I just have is like how does this affect companies who are or who have or continue to. They just walking around back there investing in this kind of technology and one of them is great company here in Toronto.

Voice flow and maybe they’ll just say this doesn’t really affect us that much, but from my understanding it’s a layer of conversational design that relatively no code that people can adopt. And then it works with Alexa and Google to then push sort of voice interaction with both systems, and so if one of 1/2 of those systems is sort of sunsetting, what does this mean? And maybe I’m off with my sort of assessment of that I actually am not fully sure and you can see that they’re not just. They’re not just building, for example, interaction layers through Google Home. There’s lots of different applications of sort of the system they build in technology, so I think maybe they have some immunity to this, but overall there are companies. There are people. There are developers. There are communities who invested a lot of time into this, and this is a pretty big change. So it’s really all I’m I’m pushing the extent of my knowledge of processing, but I do think this was worthwhile sort of news for anyone who’s involved in sort of speech recognition and AI and conversational.

Design intelligence where a lot of. Goals were sort of accumulating to make voice interaction more just more frictionless, more natural, and to unlock value in that. And unfortunately, it looks like that didn’t happen, just quick enough for Google to see the value and then resolves in its sun setting. That’s going to happen on June 13th, 2023, so would love to hear your thoughts on this if you’re on YouTube, you know, like and subscribe for this kind of content and let me know what you’re thinking. I get some of this wrong. Am I obsessing this wrong? It’s very possible.

Very very possible. I was too busy focused on my haircut to digest this fully. And then if you’re on LinkedIn, shoot me a message. Let me know. Really fascinated about this stuff and a big big believer in voice as an interaction layer. Wondering how you’re feeling about all this after this change, so thank you for checking this out. Very appreciated very much. This has been Tyler Brandon. Have a good day.