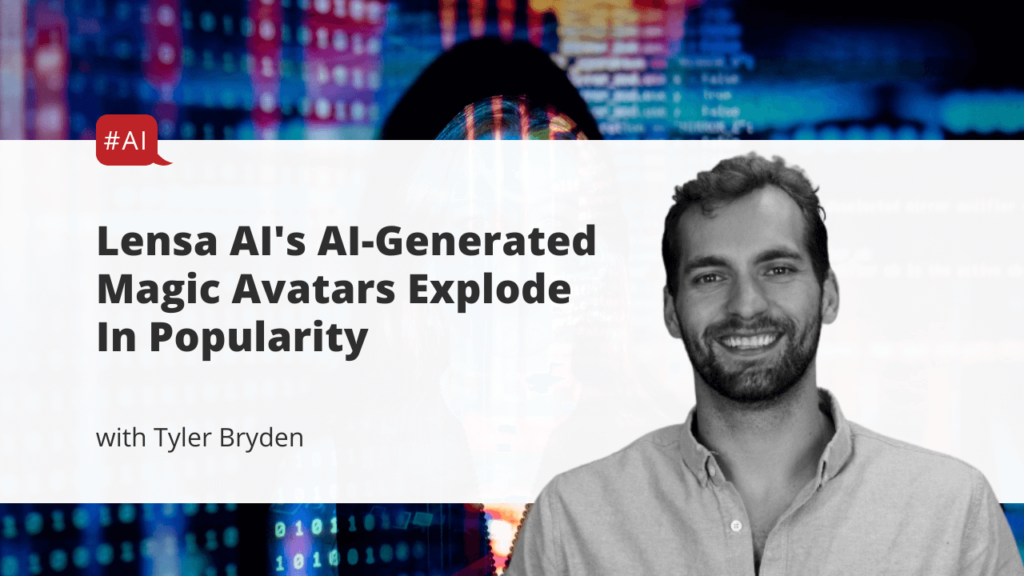 Lensa is a brand new way of making your selfies look better, than you could have ever imagined. Forget about conventional filters and photo editing tools. We bring you the simplest, yet the most practical mobile app to date for perfecting your selfies on the go. So, if there’s anything you think should be corrected in your selfie, you now have this amazing, simple app to help you.

– Viral Magic Avatar Feature
– Using Stable Diffusion image generation models
– Take 10 to 20 selfies and Lensa creates 100 AI-generated photos
– $12 for the offering
– App has over 22 million downloads with 2 million in the last month
– Rumour that it made $600K on December 2nd alone
– Challenges with sexualization, data collection, bias and more
– Articles now going live sharing excitement and warnings
– Lots of celebrities are using the application and sharing online which is driving growth
– App taps nicely into people’s love of selfies
– Artists sharing negative sentiment of the application
– People saying images are bad (hands etc) but we need to remember how early we are
– Parent company is Prisma

OK. Hello. Hello. Hello. Tyler Bryden here. I hope everything is going well. Generative AI, it’s taken over and there’s a new thing that is trending this week that I want to cover. I’m sure if you are following this space at all, you’re already seeing that and that is lenza AI. And I looked into lenza a little bit before this. I’ve got a nice little description of them here. Was apparently doing a bunch of photo and video editing people were using for selfies, lots of different things. So it was already a really popular application, but that has increased.

Tremendously with the update of this Magic Avatar feature. And so for many of you, you’re maybe now seeing images like this where people are uploading selfies of themselves. They are getting fantastical results with those lots of I think mixed ones where maybe people are getting. Ones that are a little silly or not accurate or things like that. But overall I think people are enjoying this output quite a bit and we’re now seeing the rise of celebrities doing this. So we’ve got our good friend, one of my favorite comedians of all time, Conan here, some wonderful images of of him shared directly on Team Coco and many, many more along that line. So I think this is a spike. In fact, I can search that up in one second.

To see if that spike is true because I I can just feel it. I can see it, I know you can see it. You’re looking this up, you’re looking for this video or information around this right now. If you’ve come across this video there we go and sort of proves the point. This is in Canada in the past 12 months and we are at peak 100 for this. And I think just a couple sort of interesting notes on this just as as take take a look I’ll put the the images back up because they’re pretty so we can.

Keep that on the screen while I sort of talk about a couple of these things. So one of them is I guess just overall the price point of it. And there’s a great post. Let me pull this up from Allie Kay Miller and if you don’t know, Ali Kay Miller, awesome entrepreneur in sort of AI space, formerly with Amazon and their startup team talks about the app. First of all, being incredibly easy to use 10 to 20 selfies of yourself, ideally. Those are good quality selfies, I believe from different angles. I haven’t done this myself.

OK. I don’t know if I’m going to and maybe I’ll share a couple of reasons why. And with that 100 and 100 I generated photos that you can use for social media other profile so you are free to use them $12.00 for the entire package so. 100 photos. I’m not gonna do the exact math or cost breakdown of this, but as Ali sort of alludes here, it’s a high profit margin that they’re making. They’re using the stable diffusion model and my guess is they’ve got a series of set sort of prompts for these hundred images that are generating that produce these, you know, again, magical sort of outputs that people are really excited about. And when you put in the order or just, you know, submits those prompts and generates those images. Now again, lots of messy sort of outputs in this process, but overall people are happy.

And are sharing these and there’s this virality spreading through this app because of it. Now what she also details is 22 million downloads. This is what I’m talking about, is being used before for other applications. Now it’s being used, you know, with virality with this function. And two million of those came in the last month. And as this has trended, as this has spiked $600,000 on December 2nd alone, that was the revenue sort of rumor that has sort of come about.

You know and a couple other points that I think Ali explicitly points out and others have done and have got some sort of articles, I’ll post those in the links and description so you can, you know, you can check those out. But sort of talking about this idea of over sexualization of women and the photos and so she said. So over half of the photos that she actually generated with this app were sort of inappropriate to share. Another one is, you know, sort of sort of females talking about this down below. Is that sort of overwhelm anization feature exaggeration a little bit more? Like, I don’t even know how to say this properly, but making the avatars or the final output looks a little more Asian than European, so that’s something that actually is pretty.

You know unanimous across sort of the comments and sort of feedback on it and the other interesting thing here is that there are you know people talking about picking other when gender selection. So then with that other than there is less sort of over romanization over feature exaggeration that’s being that’s sort of occurring. So that’s a I guess a tip if you’re looking to not have oversexualized avatars. But overall you know people, you know a lot of people. Testing it, a lot of people printing these images in and I think that then brings up the sort of next concern, and I think there are a couple sort of articles specifically around this around sort of privacy policy on the data that they’re using, how it’s training for the system. They’ve got the privacy policy on Prisma, which is the actual main app. And then a couple sort of, you know, warning signs around lenza being using your photos to train their AI, which in most cases user, you know any sort of data that you’re submitting.

In some case, you know, with AI engines are, you know, doing that process, they’re trying to improve the system to create better outputs. And so again, stable diffusion, which is sort of open source, we’ve talked about them lots in this channel. I’ll put a link if you haven’t come across them and you’re sort of just diving into this world for 399, saying 10 to 20 and then for three 910 and then they receive 50, which is a little bit of a conflict. I don’t know if they’ve lowered the amount of output maybe by cost or the volume that they’re doing and they can’t necessarily handle it. And then I think there are.

And hands, that hands don’t look great. And you know This is why real artists can never be replaced. But for anyone who’s sort of following the trending exponential quality of this technology, it’s very obvious to us that those changes are very pointed out and with that will already be addressed very quickly and I think are already being addressed with models that are doing much better on for example hand outputs. So I think there are a lot of again. Other things where it’s like if there’s influencers online who are sharing this kind of thing, then there are, you know, the the the virality of it really grows. And then there’s also then the concerns for sort of, you know, anyone who’s wanting to.

You know, do that. Well, because they’re seeing their artists, celebrities do it will then do it as well too. And it and then it sort of accumulates over that. And I think with that, you know, we’re moving into an area where we’re all starting to see sort of mainstream applications. Maybe it’s not solving this like problem that Judah, but for the world that we’re living in today, people want to have cool pictures, people want to have this is this is value in today’s society and I think this sort of in process as a whole.

Really goes. The tackles are are sort of. Self love, narcissistic desire and that’s why so many of us are willing to jump through the possible consequences of this to get the output that we idea and so we can have a cool images so we can you know be part of this cultural moment similar to what we’ve seen with crypto similar to what we’ve seen it with NFT. I certainly you know question how NFT people are flowing when people are able to do this for 399. I think the value of that continues to be detrimentally impacted by these systems that allow us to create.

You know relatively incredible art for pennies in our own way that we want and so overall I just thought this was you know definitely worth highlighting super fascinating. I if I do do this I will share the images that I get. I just haven’t necessarily had the time the desire yet it hasn’t hit that threshold for me but we’re now seeing you know many influencers doing it and I’m guessing that you know I’ll probably. Fault you know fall apart at some point and I’m sure maybe you will too after watching it. Anyways this is the video on lenza AI exploding in popularity with this magic Avatar feature giving you all the links, all the resources you need checking out. Hope you enjoyed if you do it would love to you know see the feedback and you know your input or anything that you’re thinking about it. And just amazing to see this just explode with popularity similar to Jack GPT I think earlier this week. So thank you for checking this out. I’m Tyler.

Unsubscribe like all that good stuff. Hope you have a wonderful rest of your day. Bye bye.