Should Companies Promote Their Venture Capital Raises to Leads and Customers? 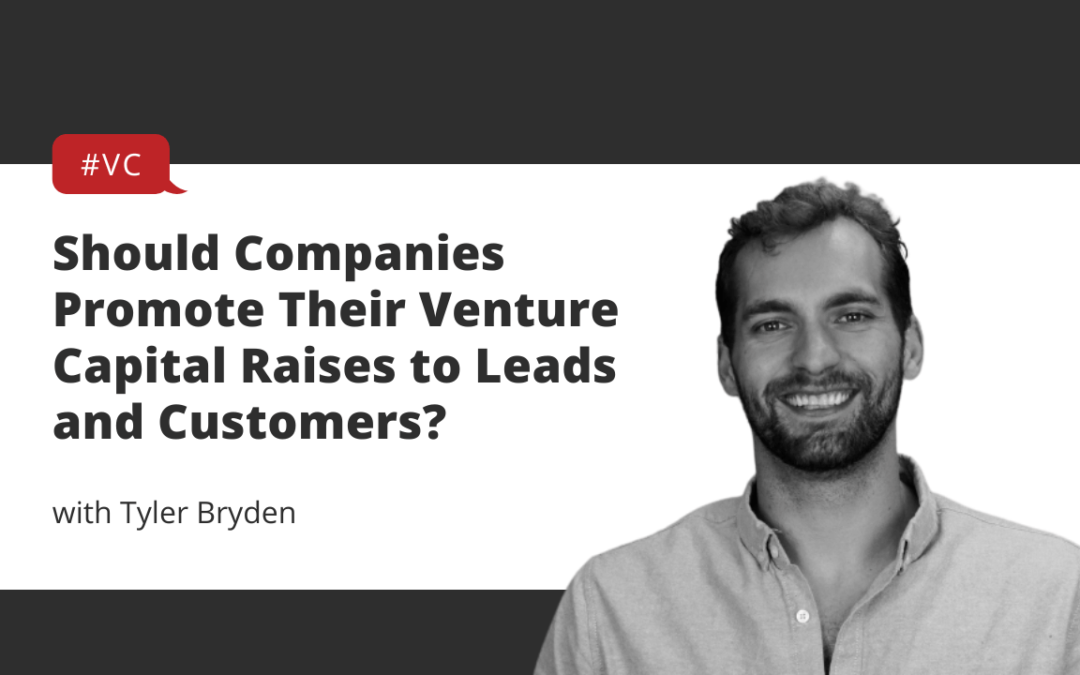 Speak With Tyler Bryden
Should Companies Promote Their Venture Capital Raises to Leads and Customers?

Should Companies Promote Their Venture Capital Raises to Leads and Customers?

Would love to hear your thoughts on this!

Hello, I’m Tyler Bryden. Today I want to ask a question and that question is if you are a company that has just raised a significant round of venture capital, shouldn’t you advertise that to your customers? To your leads? What impact does this have on your perception as a user perspective, user of an application and for myself not picking on anyone what I just what sort of triggered this thought was this announcement from Vanta. And to have had some interactions before with them. Basically automated security compliance, ISO, SoC, two HIPAA GDPR and these are very important. Setting, you know is basically a functionality that your system needs to have to adhere. Be compliant but then also in today’s world it’s of a very value valuable selling proposition as well too when we have as we continue to grow it’s OK. I a lot of the questions have been around what are.

Privacy settings. What are the protocols, the what certifications do we have? And in many cases we’ve actually lost significant deals because we don’t have the, you know, the maybe the final stamp of approval. Some of these stamps, ISO SoC two can be very very expensive very and time intensive. And when you’re an early company, early stage company with limited capacity and resources don’t always have the ability to execute on those. So Vantas come along try to stream streamline that process. Hook into all your different systems.

And then monitor for breaches as well as sort of get you towards that compliance and then help you work because you can’t just hook into these systems. You also need basically a a qualified team to audit, vet and then help you with this approval mechanism so you can then say that you have these compliances so anyways vanta. So I’m not picking on vanta. I actually love what they’re doing. I think it’s very important in my interactions with them. We’re highly positive. My question is around. If you are a customer or user of these platforms.

How does this then make you feel? And I’m looking at. I guess there’s many different angles to look at this. There is yes, so I’m a current paying customer. What does this mean? I am a prospective customer customer, maybe I’m in a free trial. Maybe I’m going through the sales process. Or maybe I’m now coming across Vance’s website for the first time ever and and and as you can see, it’s a banner right on their site announcing vantas $100 million hundred and $10 million Series B funding.

And then you know, there’s other stakeholders or shareholders who are obviously benefiting from this analysis. So vanta giving more credibility in the VC community, making their employees happy that their valuation is continuing to grow, that they’re successfully raising money, making sure that they have runway the capital, the resources they need to grow the business. And then there’s that last part. There is these sort of the investors, current investors. And then you know, maybe investors who would take on the series C or the next level of funding.

Far as they move towards maybe an IPO that there is credibility and positive signals throughout this journey. And. You’re sort of asking this question, hopefully in the goal to start a conversation or to get some feedback. Because I’m just I’m fascinated with this myself and I’ve had this experience a few times. One of them was probably the biggest one was as a customer or a user I would say was amplitude, amplitude amazing, sort of product analytics application allow you to understand how companies and people are using your application. You know gives you opportunities.

To evaluate, compare and then really with the goal to optimize your application for more stickiness, more retention, better value creation and. We’re using amplitude, you know, still relatively small activity on the our application compared to big big companies. You know it’s only only about 5000 people have ever signed up and not all of them are daily active users. So from from that space we’re not using, we’re actually still on this sort of free plan of amplitude, and there’s some really nice flexibility and options and features and things that you can customize there. I’d say we’re not utilizing it as much as we’d like, but I remember when this announcement came out, so it was June 9th 2021 and it was $150 million round.

And we’re like, I wonder what’s going to happen to our plan now as a customer as a user, and I think some of those times. Maybe the. That feeling could be a little bit in your own head. My thought was Oh well, here comes amplitude. There goes our free plan. Venture capital has been invested $150 million. That means they’re expecting. These investors are expecting a significant return, and so they’re going to need to start. You know, increasing the tension on this premium model starting to, you know, find different mechanisms where you know there’s value created, and then you know you have to upgrade to then access.

That whereas before this big round, maybe they weren’t doing that as much, so there was, I think good and real concerns that when a company raises this kind of money and specifically through the lens of venture capital, where we know that then they need to become a billion dollar company, generally hitting 100 million AR’s at least. Then you start to question as a as a customer or prospective user, is this now in my best interest, and then I’ll go from the flip side of the counter side which is. I am. I am now confident that this company is going to be around for a long time. This is a lot of money. That means that they’re obviously doing something right. That means that that means that they’re going to continue to invest in the product. We’re going to make the product better. They’re going to have more technical teams. They’re going to have better support teams. They’re going to get have data scientists and machine learning engineers who can better use this data to improve the product. So there is that sort of counterintuitive or the flip side of that.

Now I had just my next caveat of that is, especially in today’s climate, we’re seeing a ton of venture capital companies who are failing. Doesn’t matter how much money they’ve raised, and we know that when so much money is raised, there was expected returns are there, and then you come into a tough environment. A lot of these companies are going to fail, and they diluted their company or they don’t have that more access to capital, and because they’ve built the company around growth and not necessarily revenue generation and profitability. High likelihood of failure and then does all this investment that we’ve made all this time and energy all the money that we’ve paid doesn’t just go away, and generally I think in a lot of these cases there is some sort of buyer that’s possible even if it’s not, you know, ideal for the investors or the company. Someone if the product is good enough, we’ll take over that product, grow it, or at least sustain it and and create value with it. But there are those concerns I think as as as.

Like a customer or prospective customer of the application. I’m just trying to think if there’s anything else here that I know why this sort of compelled me along, but you know, as someone who has. Generally, to date bootstrapped the company, not necessarily out of my own. You know my own desire, just sort of the circumstances that we’re in. I see two sides of it which is as as that I have the skepticism of venture capital knowing friends who have had positive instances. But I’ve also had many friends who have had.

In the not very positive instances of this where it was almost better for them to fail completely and shut the company down than just become this sort of zombie ghost company that was break even or profitable etcetera etcetera. So I’ve seen that side of venture capital. And and then I’m also have sort of this other side which is I. Wish that that capital was available to our team so we could grow the team, grow the product, grow our expertise and do the things that we want to and be able to act upon some of the you know, questions that we’ve got from customers or product requests or feature requests that would be very helpful for us to be able to grow a Better Business, build a Better Business. And generally that is something that we want as users of a product. I’d be very devastated if one day just, you know, Intercom just went away or you know.

I don’t even know why the other good examples of that, but Trello these systems just weren’t good enough in in generally at that point maybe be like OK, you know what. Maybe I’ll pay a little bit more because I want this company to stick around. I want this product to stick around, but this is just sort of a question that I’m asking today. I won’t belabor on it too much. I would love to hear your thoughts is if you are a company that has just raised a big venture capital round or even just you know an early or early round. Do you advertise that to customers? Do you advertise that to leads?

Is that a valuable thing that helps customers feel more confident and more excited to work with you, or does it have the sort of cooling effects where you might be concerned about the intentions? The intentions of especially in business models where it’s not necessarily always revenue driven? What are you going to do with my data? You know? If are you mining my data and then selling that to third parties, how are you generating this revenue? This return? That’s expected in venture capital? So would love to hear your thoughts. These are some of my thoughts on it and I didn’t really come to a conclusive example or.

I guess answer. I think there have been ways that companies have done it well. Companies that have maybe not done it so well, but generally maybe it. It depends on the type of customer where you are in the stage and and and what you’re trying to accomplish. That making sense in that the advertising these venture capital rounds makes sense. So I hope this is sort of interesting or just a little bit thought provoking. I’ve been Tyler, Brian. If you’re watching this on YouTube like subscribe. If you’re on LinkedIn comment, do whatever you want.

I appreciate it very much and again, this is mentally bride. Hope you have a great rest of the day. Bye.