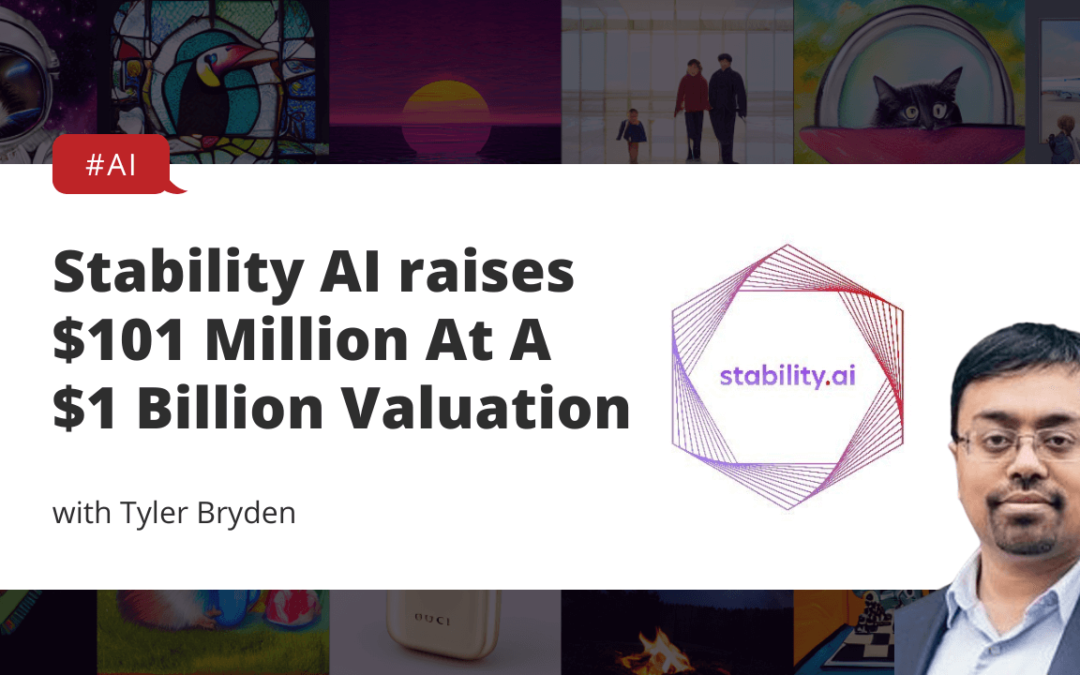 – Stability AI is a community-driven, open-source artificial intelligence company
– Funding round led by Coatue and Lightspeed Venture Partners with participation from O’Shaughnessy Ventures LLC
– DreamStudio has more than 1.5 million users who’ve created over 170 million images and Stable Diffusion has more than 10 million daily users “across all channels.”
– The open source release of Stable Diffusion has been used to create objectionable content like graphic violence and pornographic, nonconsensual celebrity deepfakes.
– Funding will support deploying custom versions of Stable Diffusion and buying more computing power
– Stability AI has a cluster of more than 4,000 Nvidia A100 GPUs running in AWS
– Will grow from 100 to 300 employees over the next year
– Have other commercializable projects in the works, including AI models for generating audio, language, “3D” and even video
– Sequoia Capital Call for Startups
– Will the next trillion dollar companies will come from generative Ai

“Every creative company in the world is testing this out right now because it allows for instant creation of any image in any style, especially when fine-tuned,” Mostaque said in an interview. “There’s been this promise of interactive personalized content for many years. This is the first technology that can deliver it.”

OK, tell Tyler Bryden here again. You know what I thought I was done recording videos for the day but some news came out. We had heard murmurs of it but the it’s officially released. Stability AI has raised 101 million USD funding round at a billion dollar valuation. That’s a post money valuation led by Cotu Lightspeed Ventures and participation from Oshaughnessy. Ventures LLC. And I’ve got the TechCrunch article. I’ve got a bunch of pieces out here in mod talks about, you know, it’s gonna be very interesting day. He’s always been quite a character. I, if you’ve seen any of the videos or anything I’ve done, you know, got a lot of love for this company. I just think they are, you know, moving towards being possibly one of the more valuable companies that’s being built right now. I just think they have so much technical ability and they also have.

The community that’s built, and I’ve got a couple stats on that, about 1.5 million users who have created over 170 million images and more than 10 million daily users across all channels. And what’s really, you know, I find incredible is that, you know, they built this process of being able to do this with images, but they are moving with the same process to do audio generation, video generation, 3D render generation. And it’s really just a demonstration, an early beginning. Of what is possible from a team with this much technical talent and then now the funding to back it and it’s about AI is not you know gone without you know some criticism. There’s been a lots of challenges sort of with ethical and legal implications of the technology and scraping data off the web to then produce original content. There’s been a hadn’t known about this but a little bit of.

A little bit of some controversy with Reddit and how they’re like fostering the community there and this maybe you know, conflict between. Venture capital and then open source and then building communities there. But already I just think we’re seeing so much being built on top of stable diffusion with the way that they’ve released it and that includes what I’ve got here is this is worthwhile share this as a resource is basically all the notebooks and sort of libraries and Google collabs that have come out of stable diffusions releases. And you know this was released last week only spend seven weeks. This is just the beginning and there’s already like.

Molly. You know incredible 3D render thing. All these different things that I’m sure even you know maybe the team at stability. I had inklings that were possible but has just compounded and compounded over again and. This is again a big funding round, 101 million, especially in the market conditions today. Emad Mostaq, who he had bootstrapped originally, which is super cool, and then has this quote, nobody has any voting rights except their employees. No billionaires, big funds, governments or anyone else with control of the company or the communities we support. We’re completely independent. So we told TechCrunch that in a previous interview and the goal was there to accelerate open source foundational AI and I think that’s where some of this news is.

Both exciting, shocking and scary for people who were part of this community. I you know, you hope that. They will continue to be able to drive with the right sort of mindset and goals to continue to being open and allowing community members to contribute and grow alongside with the company. Now a couple other things that were just pretty wild is they have a cluster of more than 4000 dividia A-100 GPU that’s a massive sort of engine that they have. So that’s been costly to maintain, almost 50, it’s actually exceeded $50 million, their operation cloud expenditures, so $101 million.

Doesn’t seem like that much money when you consider that they’ve got a couple. Other things that I’ve mentioned in some of these articles, I got a bunch of them here just so you can get a little bit of a diversity of opinion. But a lot of the details had sort of you know, sort of blend all together on on this is that they plan to go from 100 people to about 300 people over the next year and they brought in already a bunch of high profile hires, Google Brain. Research scientists, futurists and public speakers Dan Daniel Jeffries. And again, this is not the end they have just this is just the.

Um, sort of early stage and I’d seen a couple pieces on LinkedIn, I think about about this. So like I had seen actually one of the people from Lightspeed share this. So this had been, there was actually some articles that had talked about this that they were raising 100 million around a billion dollar valuation and was even even in September. But the round is closed and now formally sort of available for people to understand that information and the impact that’s going to have on sort of. What have I AI and the space. I’ve got the link of one of the other sort of lead investors, I believe the actual lead investor for this round. So they’re investing big money.

This is not going to change. This was super fascinating piece by Sequoia, one of the biggest names in venture capital. And they did a deep dive on generative AI and basically had at the end a call for startups. So they are looking for companies that, knowing that this is a platform shift in technology, know that the world’s about to change. They’ve already made a bunch of investments in this landscape and they want to make more investments. And I think the sign that stability AI and just the shuts a short time has gone to a $1 billion valuation in such a technical.

Domain. I think of hugging face also being in this domain and then open AI. These are indicators that this is going to continue and people think the next trillion dollar companies are going to come out of this space and there will be billions and billions of dollars invested in it. And just an example, I created a video about this earlier lexica art. This is a layer built on top of stable diffusion to help you search and find. And they’ve added some more functions, but this company alone has raised $5 billion to.

To continue this acceleration of indexing, archiving, making searchable, help improve this idea of prompt engineering. All these big pieces that work when you were doing big you know, language models that then need the right sort of prompting to then get the output that you were looking for and that is going to continue to increase. The building is going to work through that. If you want to check out a little bit more, take a look. My account is out of credits classic, but you can see.

You know how easy and intuitive this is, how incredible some of the outputs are, and I just thought it would be good to end with, I think, an amazing quote from. Emod there, which is every creative company in the world, is testing this out right now because it allows for instant creation of any image in any style, especially when fine-tuned. There’s been this promise of interactive personalized content for many years. This is the first technology that can deliver it. And so when we think of the Community that stability has built with stable diffusion, the technical team the ability to scale this into multimodal.

And just the overabundance of excitement and enthusiasm for this space. I think this is a big announcement that indicates you know, where the journey of the technology and then the world is headed on personalized generated experiences that we can create using language that is in tune and native to us to just create and render whatever we really want. So super fascinating, interesting time for the world. This is just one signal of it, but it’s a big signal and I am excited to follow. Hopefully find even more ways to contribute to this journey, because I think it’s just such a crazy, mind-blowing thing. So if you want, you’ve always got the links. I’ve got all the links. As always, check out stability AI, they’ve got the.

Release, so you can actually use it. They’ve got the funding now and a lot more is going to be coming down the pipeline. So thank you so much for checking this out. I hope you have a wonderful rest of the day if you like it like all that good stuff. Thank you very much. Bye, bye.