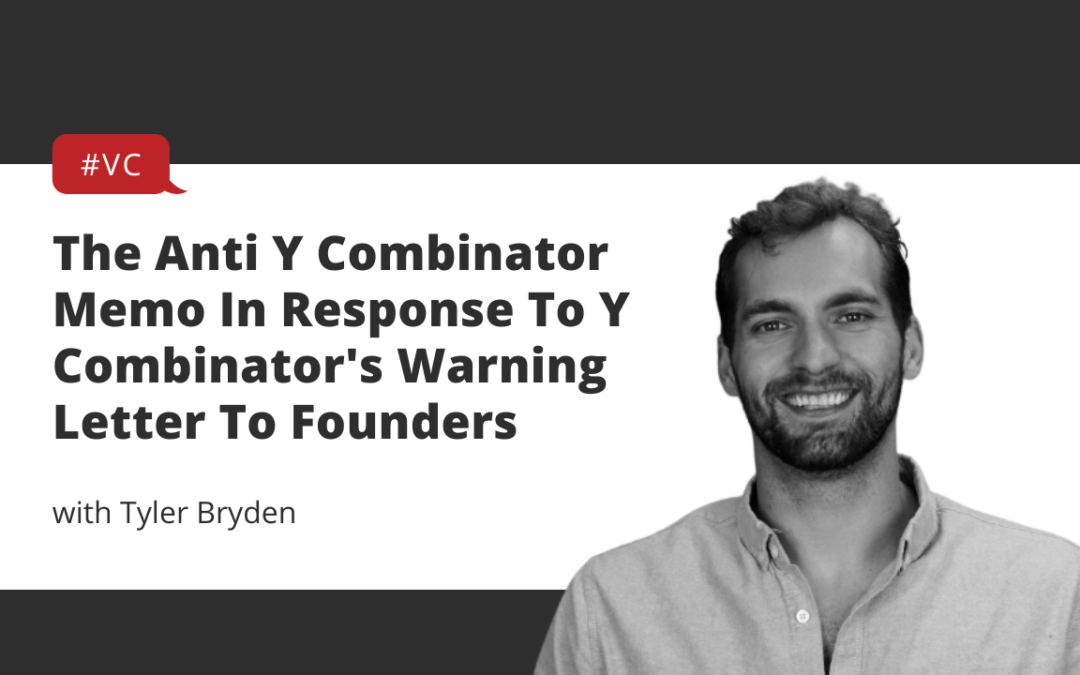 All right hello. Hello Tyler Bryden here hope everything’s going well. What info open a video from I think last week or a few weeks ago which was why Combinator and their recommendation to founders based on the current market conditions. Basically this doesn’t look good, and so I wrote. I print a video out about that. What I like to see Tyler and a little bit of advertising here popping up on Google if you type in this. Why Combinator warning letter and sort of posted this and I have the actual original email. Here so a lot of recommendations that were made how bad it will get. Things don’t look good. You’re probably not going to be able to fundraise again. Need to have at least 24 months of runway. The metrics that are changed, the metrics have changed for you to raise different rounds. Focus on profitability. Cut gas, make this lean. All these you know wonderful advices that then many people sort of say hey, why company do the reason why this circumstance has been made?

Inflated the valuations of companies through the model that you’ve done where there’s been companies that they got the check from NYC and they’re going to raise at a 50 million valuation with almost nothing. You know no product, barely any customers, etcetera etcetera. Some of those customers might even be who I see alum who are then helping boost that and inflate it further. So lots of skepticism around this entire thing. What I thought that was interesting was this post that was floating around and I don’t know if if you nice here was the original.

Right, because I saw this on a couple profiles and I think she actually credits David I don’t know again if he was the original person who shared this, but basically it is the anti Y Combinator memo and I think this is a really fascinating thing that took place where after this this you know why YC letter went out. That was the signal for investors. That was the signal for founders. That was a signal for companies to. To make changes in their path and in that case we’ve seen a ton of layoffs. We’ve seen hiring freezes. We’ve seen companies just crash under the pressure of this, and I think we’ll continue to see that, but you can see the power and influence that why Combinator has in this sort of market when they put out a note. That’s that’s in-depth. That then gets shared everywhere, and so here is the anti Y Combinator member memo and basically talking about how we live in extraordinary times. Yes, markets.

Have adjusted, but that is. The the the valuations that they should be and I’ve seen this over and over again and I remember you know as we looked in you know got approached by investors and we’re talking to investors you know had friends going through this journey, some in very high growth. But high risk markets with not much to necessarily show for asking for ridiculous valuations, and even at the time we were pretty conservative with the valuation that we were looking at because we we don’t come from this sort of Silicon Valley, you know, sort of place where these valuations are are so high or the money that you raised this is so high. Also, we’ve seen you know the consequences of raising at too high of a valuation, raising too much money, the expectations that are the returns that are expected all the downstream. Consequences that when you really start to study and follow the journeys of companies, not just in the initial boost of hey, we just raised a big round, but you look at 2-3 years later. Where are they?

You start to get a little bit more skepticism, and I remember one of my first ones was even looking at 500 startups when they when they sort of approached us and looking at their portfolio and it just started to click through the websites and to see how these companies doing and almost all these websites went to dead Links said Oh my God, most of the companies have invested and have just failed and not even have. They just failed and are just operating. You know you know in the sort of what they would call zombie mode rather break even or profitable just gone because they’d rather see them wiped out and then then operate. Because there’s no return, and if they you know if they crash then they can write it off as a tax return. I don’t know the exact mechanism in there, so don’t quote me on that, but the the sentiment I’ve heard is we’d rather see you failed and become a zombie company.

And so this anti MYC memo comes up and sort of talks about hey what we were just in was an anomaly. Here’s what is the here’s what is the the current conditions and sort of what it should be. So market is thriving, unemployment is down now there are challenges to this so we’ll see about you know how people feel. About this anti YC memo. As it starts to spread around and there’s already a ton of comments and stuff on it, early stage funds continue to deploy capital. Yes, we’ve seen that now. There has been some signals now that that is also getting decreased right now and it is starting to hit these early stage companies that it’s happening at fair valuations. Fair valuations in a way are good for everyone, and it sets people up for success, even if it feels like you’re selling off too big of a part of your company at this stage, you’re in right now.

Enterprises are spending more money on software, so this is interesting because. I know, you know, as this advice has come, we’ve actually started to look at software where we’re spending money and find ways to cut unnecessary software. So I do think you know I’m not challenging this point specifically, but because we know companies are investing in AI, investing, machine learning and investing in products that are necessary for their growth and survival as a company, and cutting costs and productivity. I guess what this maybe alludes to is that if you’re if your product’s not doing that, then your product’s not going to be good enough to survive in this environment. And then that early stage investors, yes, continue to deploy in startups because uncorrelated with public markets, again not necessarily agreeing on that point. Because yes, early stage. Yeah, that makes sense. Early stage there’s such a long run, you know. Time to, for example, an IPO that really the situation of today shouldn’t impact it. And actually, if there are fair valuations, these companies investors should want to get in because there should be significant returns. If they do make it through this journey and then go public or get a large acquisition later, and then there’s more Angel investors because of different sort of vehicles to invest than before the pandemic, which I believe is true, although we’ve seen things like different mechanisms of investments not necessarily work out.

Spacs are one that doing. Again, this is not necessarily Angel investor, so it’s different, but some of these vehicles haven’t necessarily been successful and then just a couple of advice. Set North star metrics. Make sure that you’re achieving your growth metrics regardless of what the market can conditions are, and then focus on serving your customers instead of looking at the competition. So I think those are just general thoughts that are, you know, just good, probably probably good things to follow, and I just thought this was worthwhile sharing. You can see a lot of comments, you know, founder.

You sort of people sharing where like investors are coming to them. Impression of to take capital 50 at 50% off valuation, making sure that they’re extending runway and you know investors. In this time a lot of them who have had their own losses are trying to take advantage of this, and I think when NYC and all these companies, all these investors start to share, this message becomes a little bit of a contagion of messaging. But it also works in their favor, where now they’re investing in companies who still have massive opportunities to scale and produce significant returns. That you know a lower valuation, and then they they would have took it, and so their percentage of the company that they own is going to be higher, their growth or their return is going to be higher and they need to do that, especially if they’ve been investing recently and their returns are not looking so good on their on their funds. And obviously these might be different funds that they’re doing it, but the reputation professionally does rely on them getting in early on companies that a good a lower fare valuation. So lots of people you know, sort of commenting and giving haraz on.

Let’s people tagging why Combinator, and I just generally, I thought this was sort of an interesting thread and comment on the state of it of the world today. The state of startups, the state of SAS companies, and you know I’m I’m interested to hear what you think. If you are following this, where are we? Is it? Why see you right is the anti YC right? Is it in the middle? Is it in the middle? Is it different? Depending on who you are, what stage you’re in, the company that you’re at? What are you beat CAB?

You know what? What are your thoughts on this? Would love to hear thought this would be an interesting way to share some some some insights on what we’re seeing from a top level view of people who are investing at, especially at an early stage. So thanks for checking this out. If you’re on YouTube, whatever do they like the comment that subscribe to stuff like that? LinkedIn send me a note comment Lovett, appreciate it very much. Hope everything’s going well. This has been thought Brian bye bye.