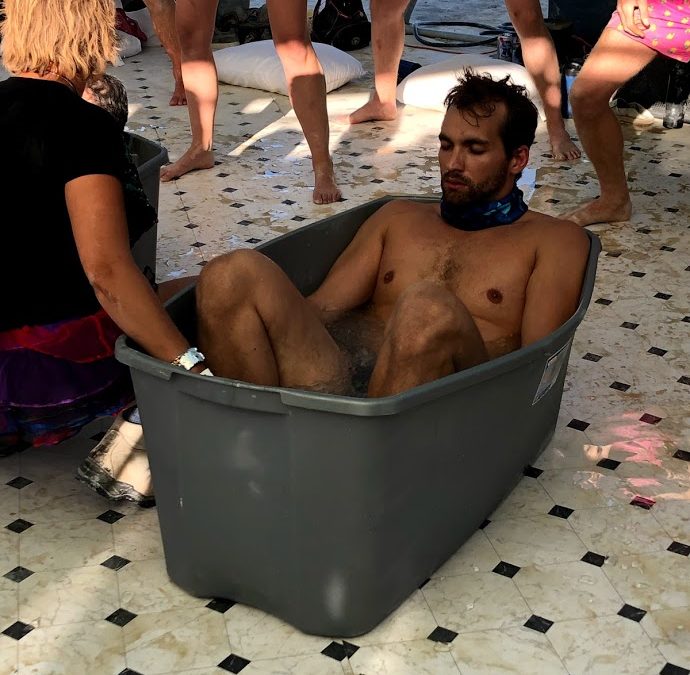 Shawn, Andrew, and I did a Wim Hof session at Burning man. The method involves three “pillars”: cold therapy, breathing and meditation. Here’s a picture of me in the ice bath at the end of it all. What a crazy experience. We were told to breathe four seconds in and then hold for eight seconds on the way out. We repeated that 120 times to a pounding, drum-driven tribal beat. By the end of it, the almost 40 people there were in a full transcendental state. No substances required.

We went into the session thinking it was going to be only an hour or so but the whole thing lasted over 2 hours. After that, I felt like many of us had just learned how to tap into an inner state we didn’t know we were capable of. It was an eye-opening moment for me that I am glad I experienced and can share with you.

Here’s a bit more info if you are interested:

“Wim Hof, also known as The Iceman, is a Dutch extreme athlete noted for his ability to withstand freezing temperatures. He has set Guinness world records for swimming under ice and prolonged full-body contact with ice, and still holds the record for a barefoot half-marathon on ice and snow. Breathe properly, Hof claims, and oxygen levels in the tissues increase and adrenaline floods the body, granting strength that we didn’t know we had.

There is still some skepticism about science behind it all, But optimist Count Andrew Huberman thinks that the use of hyperventilation and controlled breath-holding maximizes the beneficial effects of our innate stress response, while suppressing the negative long-term effects of stress.”