How To Get Beta Access To Stable Diffusion By Stability AI 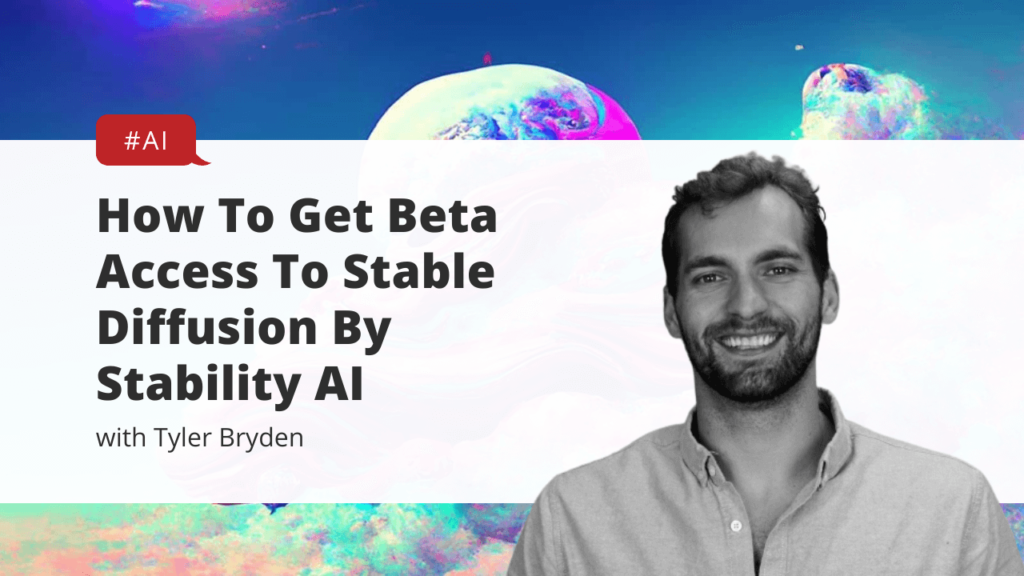 You can also see my first look at Stable Diffusion video here.

All right hello. Hello Tyler Bryden here covering our land and world of creativity with all this wonderful large language model image generation stuff that’s coming out. I had just published a video, really like right now on stable diffusion image generation by stability AI longer video. A little bit of a deeper dive. Still pretty surface level, but sort of interesting and the and I thought, OK, that’s great for some people, but what I wanted to answer in this question, or at least go through, is how to get access to it. So all this will be in this video is a little bit of. Link to the beta sign up. I got a couple other links for context around what stability AI is, just the spike in interest in it, a couple of GitHub libraries and then stable diffusion itself so you can keep on keep up to date with all the latest news but really just wanted to focus in on this now. I have actually not printed my application through so this is my disclaimer. I have not been accepted. I was. I had been hearing murmurs about this but was a little bit late and I had access to dally in mid journey and a couple of these other platforms so I hadn’t jumped on this as quick as possible.

And so with that in mind, people have been getting access, you know, previously been getting access, I think relatively quickly is about 10,000 beta testers as of their public release. That was in this article here, which was the 10th of August, so relatively recent and they’re generating 1.7 million images a day and some incredible stuff. I’ll link this article here as well too. But now it’s starting to get a little bit more popular and I can see I’m gonna see if I can pull this video up and let’s pop it up. There’s basically a couple of people who are starting to get access to it, and I’ve got here we go pull this maybe so that another good resource out here. So check this out. He sort of talks about it in this video and you can see quite a bit of views relatively quickly and then people asking some questions. People going through the process getting, you know you basically asking what’s the, what’s the time? How long is this going to take? How long is it going to take me to get access to this?

And you know, he’s saying I don’t know, it’s become super viral. We can see it in the trend now and and so it might not be as quick as it used to be, but it also looks like there are not, not just looks. They’re saying that they’re going to open this for public release, and so I’m guessing they’re going to be onboarding more and more people to it. And there’s sort of not a race, but maybe in some ways a race with all these other platforms. Sort of opening up larger access to it. So you got name. You’ve got e-mail, you’ve got organization, you’ve got occupation. And then you’ve got a message here and.

I was lucky with Dali applied really quite late into the process, but I got. I got approved quite quickly and the reason is because I’m actually creating content around this. I believe this is one of the reasons other people had, you know, done months and months in advance. Maybe I was an anomaly and just got through at the right time, but what I would say is if you can in this message, add your LinkedIn profile, your Twitter, your Instagram and if you’re participating in image generation. If you’re doing research on it or you’re sharing or creating content on it, the likelihood.

That you get accepted quicker. You know this is a theory, but I’ve seen this played out once and other people have sort of agreed with this theory that you may be sort of prioritized for access and go quicker, so that is not 100% certainty. I have not seen things that confirm that specifically for stability. I or I have not seen things that refute that, but just in the general you have, you know things that are relatively standard and then you have this opportunity for a message. With this message you can share your heart. You can share your love, you can share what you’re doing, what you’re passionate about.

Some of the incredible generation that you have, maybe that you have people who are following or an audience that are, you know, interested in what you’re doing with image generation. And you know, just sort of. Logically, it seems like that would be, you know, valuable to then compared to someone who doesn’t leave any message at all. So really, would love to hear if you do so you do apply. What’s the timeline? What’s the timeline for you to get into this? I’m going to go ahead with my own application here. I will write a message out and I’ll maybe even share the message in a YouTube video or something, or just below in the description.

And then I’ll let you know about the waiting, waiting time that I had. We can go back and forth and hopefully it’s not as long as some people have experience with Dolly or other systems in the past. But really in this video, I wanted to keep it short. I’m already at 4 minutes, so I have gone against that is basically just how to get access to the stable diffusion beta. This is coming public and you will have opportunities to get more access to it soon. But for now, this is the path that you want to go for and I wish you the best on it. Maximize that message the way you can.

They’ve got the link in the video. I’ve got a couple other links for context for you. Go ahead. And if you like this how you like following this stuff long, send me a message like comment, subscribe, all that good stuff. I’m continuing to dive deeper in this and I love it very much. We’re in a wonderful, wonderful time for creativity and technology and I, I hope that you enjoy it as much as I do. This has been Tyler Bryden and I hope you have a wonderful rest of your day. Bye.