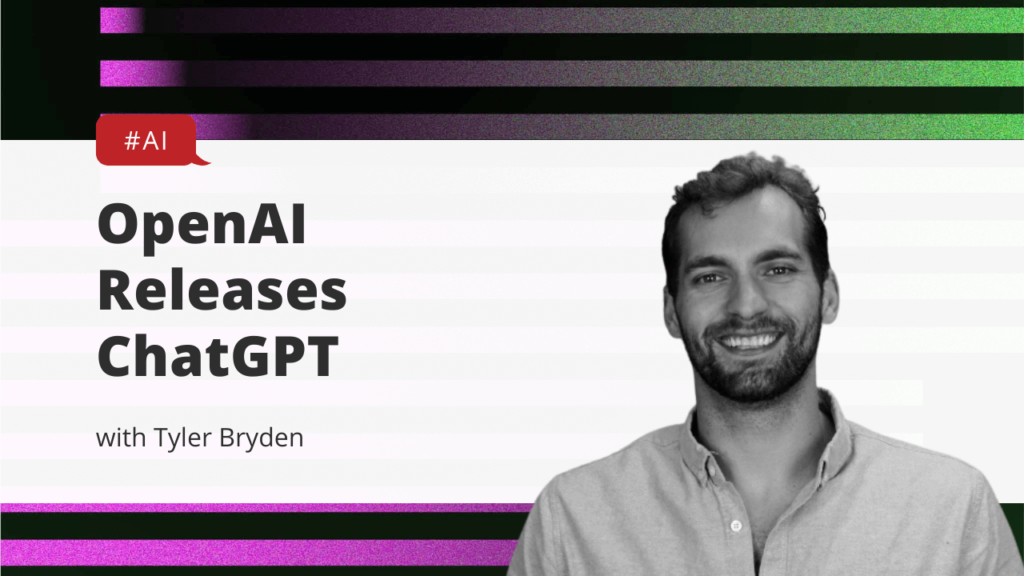 “We’ve trained a model called ChatGPT which interacts in a conversational way. The dialogue format makes it possible for ChatGPT to answer followup questions, admit its mistakes, challenge incorrect premises, and reject inappropriate requests. ChatGPT is a sibling model to InstructGPT, which is trained to follow instruction in a prompt and provide a detailed response.”

– Conversational interaction with large language models
– Insane response with application shutting down under load
– Another sign of exponential leaps being deployed to mainstream
– Hilarious examples of Seinfeld, Friends and other show scripts
– People using ChatGPT for code debugging and explaining

OK. Hello. Hello. Tyler Bryden here. I hope everything’s going well. I was working today at my head down and I had seen some rumors this chat GPT coming out a little bit last night, a little bit today. I had put my head down and by the time I raised my head up the Internet was ablaze with conversations about Chad GPT. What I wanted to do was take a look at this. We can see sort of the blog post just came out November 30th, 13 minute read and you know basically allows you to have sort of this. Dialog format with the large language models that open AI has been producing and this has you know, this has set the sort of world on fire with examples of Seinfeld and all these different sort of memes and interesting ways that then people are interacting with the system. People finding amazing advancements and incredible things and then also finding no gaps and holes in the technology. The other thing that I will say is while this is very exciting and I was hoping to show a little demo in this video.

They’ve had a lot of people come by and so it’s at capacity. I think Sam here, I said there’s a lot more demand for chat GPT than we expected. So we’re working to add more capacity. Generally, I think this is a good problem to have, creates even more excitement, makes people more even motivated to test out the system. You know, Sam has a lot of clout sort of in this space and when he says something, says it sometimes quite simply and sort of says this is a prototype. This is an early version and obviously with that there are lots of challenges and people talking about many sort of incorrect results. But overall.

Seems like a huge advancement in sort of the interaction layer that is happening in sort of conversational AI and natural language processing. And there’s a lot of people working in this space who are probably both excited and then probably a bunch of people who are probably a bit scared seeing the advancements that open AI is making. And those just the speed that they can deploy something like this and then the traction that can be gathered so quickly for, you know, a company with huge computing still struggling to then handle. The load that is coming with that. So as always I’m taking a look, seeing what’s going on. You can see sort of a couple opportunities where you’re sort of interacting and then you know apparently there is some sort of connection to instruct GPT text Davinci O2 This is an iterative version of that with improvements and again lots of sort of links, announcements.

Dumb. Some examples here. So the best examples of chat GPP from open AI. A nice little tweet thread here. It could be not just a good debugging camp companion not only explains the bug but fixes it and then explains the fix. SO1 version of that. That’s pretty incredible. Another that Google talks about I guess. Sort of a little bit of a comparison between that.

Sort of response in Chapter 3 versus the result from Google. So you know, there is, you know, basically saying Google is in trouble with this. Now Google is working on these large language models and I’m sure with everyone just barreling in this space towards, you know, wanting to be a leader in it, their iterations is going to come quickly and fast and people learn a lot from it. Now another super interesting example was sort of this. Basically it’s a question that Guy Parsons had with with Jack GPD and and asked how it could go about decorating a living room which then gave it gave back. Basically prompts that then he could use in mid journey and then show some examples of the output that actually came. And I want my room to look like this. So super fascinating, like beautiful beautiful outputs.

Creative writing should have gone back. Yeah, there we go. How to make, how to make money in write code. So ton of great examples. This is obviously in the links as always, so you can check that out and then you know when people are when opening it does something, people are following it. So lots of articles sort of documenting the first interaction layer with this after say 24 hours we’re coming up and not even 24 hours and lots of again, exciting things. But then lots of sort of.

Challenges so people writing friends ROM Coms all these different things and you know overall I mean just the volume of interaction or I guess reactions to this is pretty wild and the reason why even in short little timeline even being built to dive. You know too deep into this I was like I gotta I gotta talk about this I got to put the video up with this would love to hear you know what you’re thinking what you’re seeing what’s what’s your thoughts on this and you know are you excited are you worried are you attesting this are. That you were able to get access before this all shut down and you know, overall. Just the we’re going to continue to see examples. Elon tweeting about it, I think I have a list of.

Top sort of versions of it, sort of tweets around it and you know, all over the place with, yeah, big leaders in tech doing it and just another sort of driver and momentum booster for generative AI, how people are interacting with it, the exponential leaps that can be made very quickly. And then the ability for our company like open AI to be able to deploy this technology and see it be taken over us. You know, it’s just taken by storm. So I’m Tyler bright. This is the end of the video. Hope you enjoyed like it. Come let me know what you’re thinking about this. Would love to see more. Excited to see some demos, all that good stuff. Super interested phone as always and I appreciate you checking this out. Have a wonderful rest of your day. Bye bye.