Comparing Jack Harlow’s Rise To The Journey Of A Startup 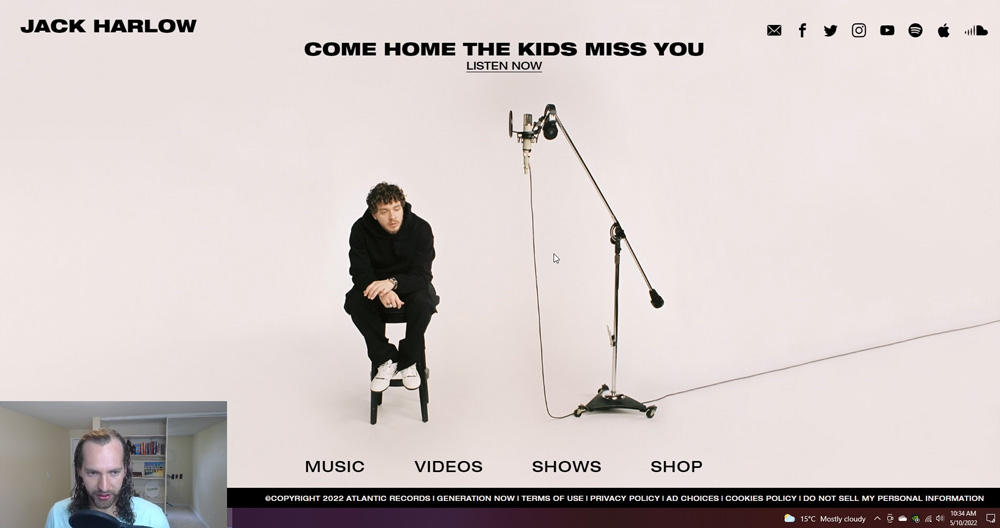 Hello hello. Hello Tyler Bryden here hope everything’s going well. Wanted to talk about something pretty interesting, at least to me today which is this rise of Jack Harlow who is a hip hop artist. I’ll pull him up on the screen here right now and for anyone who is known me for a while I was at one point in my life. I had wanted to be a hip hop artist. I would rap would freestyle. I still write lyrics. I still do freestyles all the time and growing up. The idea of this. You know being a hip hop artist being a creator. Even I would say with what YouTube and now all these platforms have enabled wasn’t a legitimate path to success or something that was encouraged and so.

It wasn’t really necessarily the path I chose a little continue experiment to have fun and do lots of lots of stuff, but with sort of this next generation, there’s been this rise in craters rise in artist and in a much more I would say, non traditional way than what we had seen, where the barriers the the record labels. These people allow you to have success. You know they don’t have the same hold on people and and and are you know are the ones that are blocking or making people have success and so one of the things that I found. Very interesting. Jack Harlow does some you know done. He has some big big songs. He’s you know, finding some success right now. He’s 24 years old, came from Kentucky and as he released this new album Come Home that gets miss you, I started to listen to some interviews. I just think he’s an interesting character. I think anyone who gets this much heat at a young age is at least fascinating to understand and learn from.

And and so I started to listen to these interviews and then you realize I mean for what I realized was like how much his sort of rise in hip hop. And I think this is a parallel in many is also how how that has so many parallels with rise. If I would say a startup or a company or building. Yeah, building your own business. And so I just wanted to lay a couple of those things out that I had heard from some of these interviews. Some of these things and see if at least my thought process around this lines up with maybe yours. And I think maybe maybe.

Some interesting insights along the way, so one of the first things that I wanted to touch on and I don’t think I’m going to play the music because I probably get. I don’t know what happens actually when you play music, but this is Jack Harlow. I don’t know exactly how old. Yeah, 15 year old Jack Harlow. Wrapping, you know, I know he talked about this in one of the videos. Really embarrassed about this, but what I look at this as is this idea of an MVP. And so when you’re building a software product you are not going to have the fully functioned fully functioned, fully polished version of the product that you are going to release to the public. You have the resources, you have, the capacity you have, the team with you at that moment, and you have to sort of release that. Put that out live.

And then start to gather feedback, and that’s exactly what Jack Harlow did in this situation. Was maybe he’s embarrassed about some of these videos, but it allowed him to build a little bit of a community, build some height, get feedback on what people liked about with music, what they didn’t like, and then he continued to iterate and grow based off that. So I think that’s an ongoing journey that any company is also going, especially when you’re building products when you’re releasing them. You don’t necessarily know. If or feel that maybe this is good enough, but you need to release it to get those insights and to continue to improve so there’s that little part that that I thought was pretty fascinating there. The next part that he talked about and you can see, and here is, he’s originally from Louisville, KY, and not much in terms of artistry. From there, at least from. From his description. I don’t know that too too intimately, but as he started to, you know, invest in this in this in this journey.

He actually moved. Moved to Atlanta, where there was a lot more opportunity to do open mics to freestyles to to build a community, and a culture that he could connect with and grow with together and that wasn’t available to him in Kentucky. And so he he moved to Atlanta. And this I feel like is a parallel for many of us starting businesses doing startups where maybe the city that you are in doesn’t have those same opportunities. It doesn’t have those networks, it doesn’t have those communities that are going to bring you to success and so you then move. And for me that parallel was moving from London ON to Toronto ON. And I’ve talked about the bad misfortune of timing. But that same thing which was I was realizing if I went to Toronto, the events there, the networking events. Even if I had wanted to do hip hop, even if I had wanted to stand whatever it was, there were more opportunities.

You get on stage to network with people to interact with people who are doing really exciting things. And so Jack Harlow also saw this opportunity by moving to Atlanta and then that then accelerated his career, built connections with community and then helped him grow. And then that then talks to the next part of this which was really famous. Person here, I’ll just love pull up a picture DJ Drama. Who had been a staple in hip hop for years and years and years and had been known for starting to break artists. So break artists mean introduce them. Help them hit more of a mainstream audience. Grow whether it’s signed record labels, whatever it was to help bring them to the next point in their career. And by moving to Atlanta. Jack Harlow then had the opportunity to meet with DJ Drama. Some other people here.

Who then sort of cosigned him, advised him, became mentors, and that is also something that then is a instrumental part to the startup journey you are bringing on advisors and mentors who know more than you who can help guide you through. Help guide you through the difficult journey that it no doubt will be and maybe help you avoid mistakes that they had made in their previous career so that you can move more efficiently and smoothly to the goal that you have. So this idea of finding advisors and investors to support development becomes a big part through through the signing, there was cash given that allowed to then further the development of the product. In this case music, more releases and music videos and continue to build that community, iterate, get feedback, and then grow and grow and grow. And then the last part that is I, you know, I think is worth touching on something expertly done by him and I think done by a lot of great.

Start up some companies. Is then. Aligning yourself with credible people and so in this case some silly pictures. Here. In this case, one of the you know the absolute legend in hip hop. Grateful to have him here from Toronto and represent representing Canada so so much, but connected with Drake with Little Wayne with Justin Timberlake. All these sort of legends in hip hop, who by associating with them is then building.

Credibility is almost like a cosigning that his his product, that him are worthy of respect or worthy of interacting with a following of supporting and through the through that sort of social credibility and introduction to their own audiences. Drake, Little Wayne, Justin Timberlake. All these people, that is a a big stamp of approval that allows that allows Jack Harler to continue to grow. And now have even more about confident foundation behind him, and it also sort of spoke to this journey of like early on in the stage. This wasn’t what’s happening right? Like Drake’s not going to interact with you or get on a song with you if you don’t show any traction. If you don’t show any growth if you don’t show that people who are you know look at retention and churn and products they’re not listening, they’re not watching back. They’re not showing up to shows and paying to see you perform without those signals. Without those signals access most of these people.

Are not going to support an artist because they just don’t know if it’s successful and it could actually have you know negative effects on that persons who have worked so hard to build their career. And so I look at then DJ Drama as like a pre seed or seed investor who invested very early into Jack Harlow and now is most likely getting paid dividends because of that when no one was really messing with him when no one was supporting him in the same way they got in early and invested they put the time they put the energy and brought him to this next stage and then they rewards. Whereas Drake and some of these other artists are maybe Series B where he’s already shown that traction he’s hit his. You know he’s hit his AR mark in terms of revenue. And now there’s other levels to this, as well as aligning with the Next up and coming person in hip hop and and and culture and pop. And I think this is something that he’s also done really well as transcend beyond just hip hop into some of these more mainstream things. Very precise with marketing through.

Tech talk and things like that, so I hope this was not too much of a reach. I’m sure that there is more, and if I you know, listen to more interviews or I’ve read more I’m. I’m sure that there is even more parallels to his journey and someone going through the startup journey, but I just thought this was an interesting sort of process or thought process that had emerged as I was listening and learning a little bit more of him, as well as the album come home. The kids miss you and you know. Overall I’m a fan excites me to see it.

You know, sort of a white guy with curly hair. Funny, goofy, but also focused cares about his career. I think those are all good inspirations for us as we could all continue on our journeys towards success success, and I hope that a couple of these. Items here made sense and even give you some some ideas on that journey. So thank you so much for checking this out. Hope you have a great rest of the day. Bye.